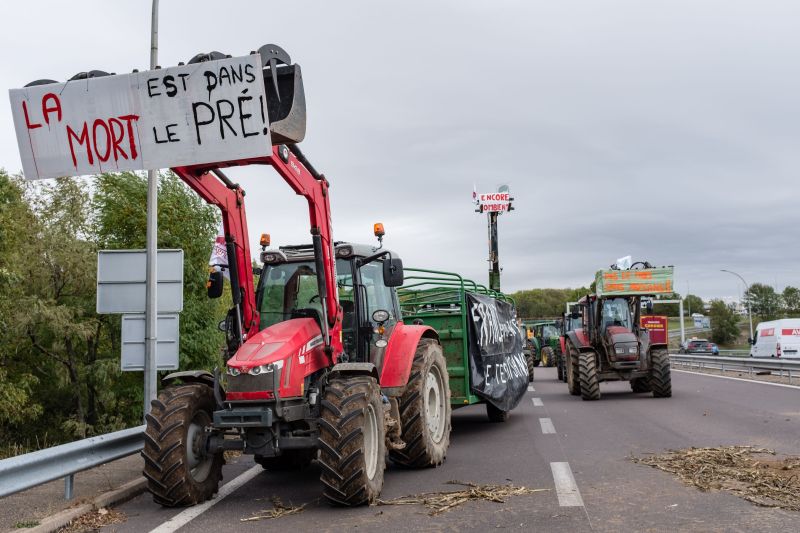 French farmers block the A6 highway entrance with their tractors, near Dijon, during a demonstration called by unions (Photo: KONRAD K/SIPA/Shutterstock)

Angry French farmers blockaded major roads in the country yesterday over fears that 'agri bashing' is increasingly becoming the norm.

Protests occurred on Tuesday (8 October) as farmers become more and more concerned with the media's representation of the industry.

Unions FNSEA and Jeunes Agriculteurs (Young Farmers), which organised the blockades, called on members to use tractors to bring traffic to a standstill.

It follows similar protests in the Netherlands last week. Thousands of Dutch farmers took to the streets to counter the 'negative image' attached to their profession.

The French farming unions gave reasons as to why they protested: “Agribashing, which damages the image of our daily business, trade agreements aimed at importing food that we do not want and distortions of competition that are slowly killing French agriculture.”

Farmers in the country are also concerned over the growing amount of regulation looking to curb the use of pesticides, with many saying they feel 'demonised' by environmentalists.

Damien Greffin, president of the FNSEA, said: “The agricultural world is stigmatised on a daily basis.”

Brittany dairy farmer Patrick Merel, who has been in the profession for 34 years, echoes this sentiment.

He said the media 'attacks' the industry 'every day': “When I became a farmer, I had the impression that my job was to feed people.

“Now it feels like we are poisoning them. Every day in the press and the media there are reports attacking us, even though people have never lived so well,” he said.

The events in both France and the Netherlands follows continuing protests by Extinction Rebellion in the UK, who are calling for a transition to a plant-based society.

Green activists say the London-based protests are part of efforts to 'urgently end the industries of animal farming and fishing'.