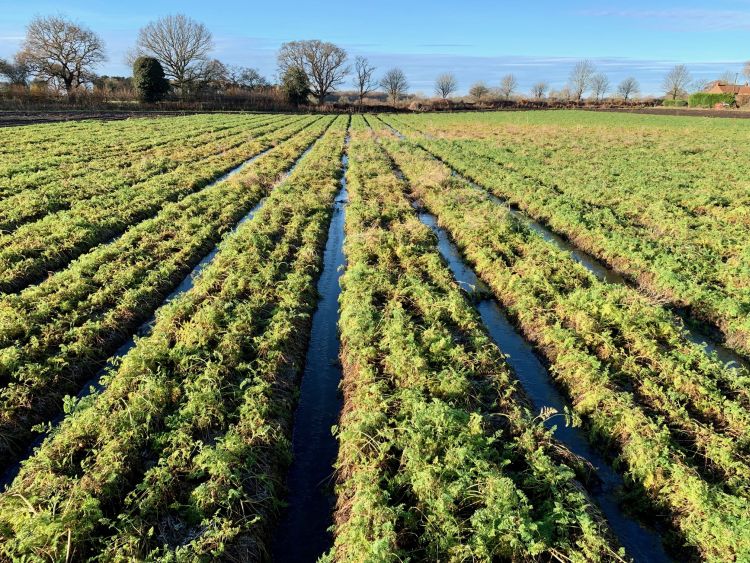 British-grown supplies of carrots are at risk of running low next spring after the recent heavy floods, growers warn

Large amounts of British-grown carrots could be 'wiped out' if bad weather persists as farmers warn of the continuing impact of the recent floods.

Growers have highlighted that the recent adverse weather events have made field operation 'extremely difficult'.

More than half of the UK’s carrot-growing areas, namely in the North of England and the Midlands, have been hit by flooding.

Because of this, producers in these areas have been unable to lay down straw to protect the crop from potential frost damage.

Trade body the British Carrot Growers Association now says there is a 'real risk' of the UK running low on domestic carrot supplies next spring.

The harvesting of carrots is continuing, but flooded land has prevented growers from using the machinery and equipment necessary to spread straw.

Growers have warned that more wet weather or a frost could 'wipe out' large amounts of the UK’s carrot harvest.

Coral Russell, from the British Carrot Growers Association, said the flooding has 'caught a lot of growers out'.

“It has stopped them spreading straw as they usually do at this time of year.

“They are sitting on a wing and a pray and hoping that we get a dry weather spell to be able to put down straw to protect the crop.”

She added that more than 50 percent of the carrot growing area in the UK has been affected.

“The only exception being those grown in East Anglia and Scotland.

“If we have a frost now or more wet weather then all the carrots that are not covered with straw will get damaged and be unsuited for the market. They’ll be rotten.”

Mark Strawson, from Nottinghamshire, and one of the UK’s biggest carrot growers, said the wet period has not allowed growers to cover crops with straw which is 'vital' to protect them from frost.

He said: “Unlike 2018, this year has generally proved to be an excellent growing season for carrots with both quality and yields above average.

“However, since mid-September unprecedented levels of rainfall have made field operation extremely difficult with very few entirely dry days recorded over an 8-week period.”

Mr Strawson said the worst affected areas are the East and West Midlands and Yorkshire where soils have been at field capacity for several weeks.

“With such a small area protected to date and field conditions remaining poor there is a very high risk of crop loss should the weather now turn cold.

“Such a situation would severely disrupt supplies to retail customers.”