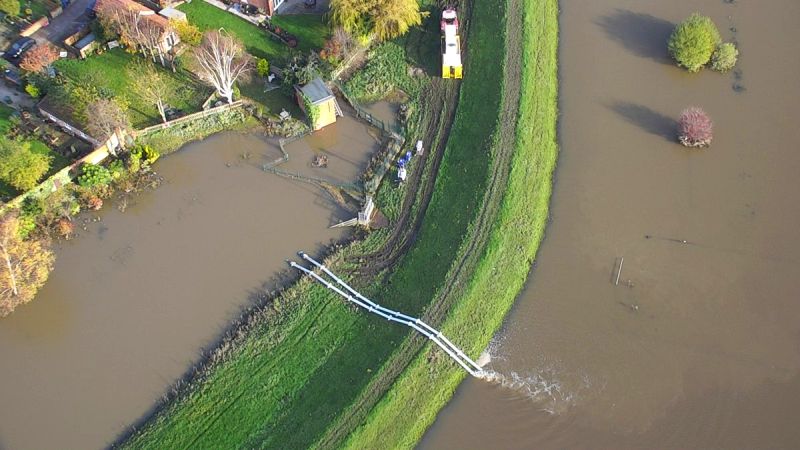 Flood-hit farmers in northern England and the Midlands are able to apply for up to £25,000 in government grants

Farmers affected by floods are now able to apply for grants of up to £25,000 after industry groups criticised the government for not helping enough.

The Farming Recovery Fund will be extended to support farmers badly affected by the flooding across Yorkshire and the Midlands.

Through this scheme, those who have suffered uninsurable damage to their property will be able to apply for grants of between £500 and £25,000 to cover repair costs.

Farm businesses, particularly across the East Midlands and North East of England, have reported the worst rainfall in living memory.

In Lincolnshire, the floods drowned more than 1,000 acres of farmland and many businesses were unable to work as they were cut off and stranded.

The Met Office says the United Kingdom received 109% (138.8 mm) of its average rainfall in October.

Defra Secretary Theresa Villiers said it is hoped the increase funding will help farmers impacted 'get back on their feet'.

“Earlier this week I visited Environment Agency teams on the ground in South Yorkshire as they work around the clock to reduce flooding risks and keep people safe.

“I would like to pay tribute to the dedication of these staff, alongside our emergency services and armed forces, who are working day and night to protect our farmers, local communities and businesses,” Ms Villiers said.

A community recovery grant will also be made available to councils, equivalent to £500 per eligible household and businesses will be eligible for up to £2,500 each.

The Royal Agricultural Benevolent Institution (RABI) has also announced that it will fast-track grants to those farmers who need it.

It follows mounting criticism from industry groups and local residents affected by the floods over the government's lack of action.

Prime minister Boris Johnson was accused of being 'out of touch' by the NFU president Minette Batters in an interview with Channel 4.

Mrs Batters told the broadcaster: “I've spoke to farmers who have been asking for pumps to be brought in over the weekend with flood defences clearly about to be breached, they've had no response.

“Farming businesses have had no interaction with the Environment Agency or anybody at all... they haven't had any engagement.”

Meanwhile, opposition leaders criticised the government for not declaring a state of emergency, a move which would have boosted help to flooding areas.

But the Country Land and Business Association (CLA) applauded the government for announcing the grants, saying it will come as a relief for many.

The group's president Tim Breitmeyer said: “Farmers and landowners have been devastated by the destruction that has been caused by this flooding and it is vital that the money is made available quickly and easily.”