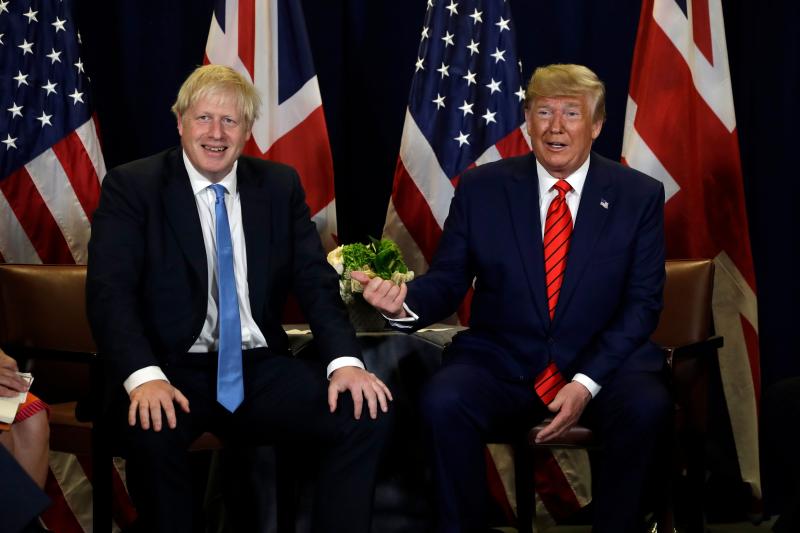 The leaked Department for International Trade documents contain discussions between UK and US officials over a possible future trade deal (Photo: Evan Vucci/AP/Shutterstock)

The 451-page dossier, which show six rounds of trade talks between the two countries, reveal three years of negotiations and was unveiled last week by the Labour Party.

The papers show that the United States pushed the UK to allow greater use of chemicals in food production, including chlorine-washing chicken and other foods, like beef.

These rules were repeatedly discussed over two years, with the documents in July 2018 revealing a ‘challenging and difficult’ meeting, where US officials saw ‘sanitary and phytosanitary’ (SPS) rules as the biggest ‘sticking point’.

EU rules on SPS limit many pesticides, veterinary drugs like growth hormones, and pathogen reduction treatments such as chlorine washing, that are allowed under US agriculture rules.

The documents show one US trade official suggesting the UK move away from the bloc's food regulatory standards post-Brexit to one of 'regulatory autonomy'.

The same official went on to suggest that the UK had used chemical washes to treat food in the past 'and wondered if there would be an interest in bringing them back post-EU Exit'.

The US team even agreed to share their ‘public lines’ on chlorine-washed chicken to help UK officials try to sell the controversial practice to British consumers and help ‘inform the media narrative’.

Responding to the leaked documents, the Liberal Democrats said that a US trade deal with the UK 'poses a threat to family farms'.

Brexit spokesperson Tom Brake said: “Farmers would face a perfect storm, losing tariff-free access to vital markets while being undercut by low-standard imports from the vast US industrialised agriculture sector.”

It follows comments by Woody Johnson, US ambassador to the UK who said imported chlorinated chicken should be offered to British consumers who would then decide whether to buy it.

Wilbur Ross, the US commerce secretary, has also said that the British public would have to accept chlorinated chicken as part of any trade deal between the UK and US.

The NFU has warned that farmers in the United States could 'out-compete' British farmers in any trade deal between the two countries.

The union's president Minette Batters told the BBC in August that the government must provide reassurance to farmers.

“There is a huge difference in opinion in what's needed in a US-UK trade deal. Agriculture is always the last chapter in any trade deal to be ratified.”