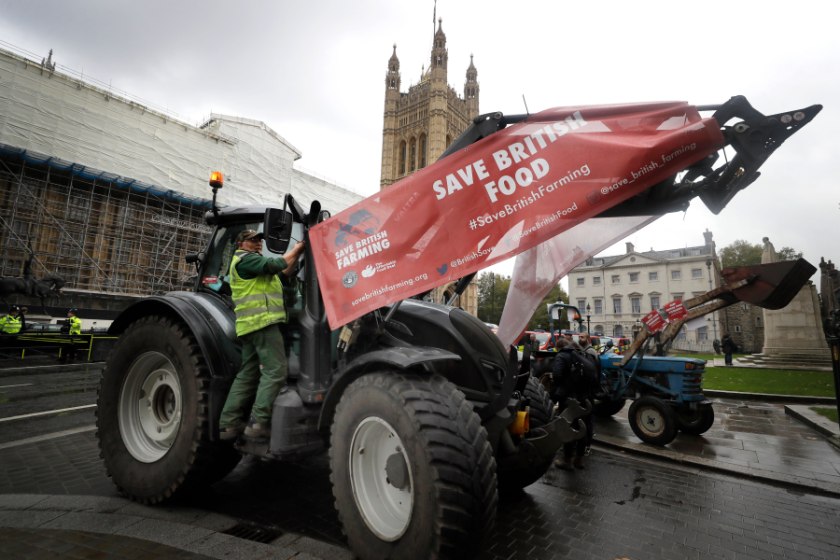 Farmers protested outside parliament ahead of the crucial vote (Photo: Kirsty Wigglesworth/AP/Shutterstock)
Sign in to add your own press release SIGN IN Register

MPs have rejected an amendment in the Agriculture Bill which sought to protect UK food and farming standards in future post-Brexit trade deals.

The clause, which was tabled in the House of Lords by Lord Grantchester, required imported food to meet UK legal standards from 1 January 2021.

In turn, it would have offered crucial protections to the reputation and livelihood of the UK’s farming industry.

It had garnered a swathe of cross-party support, including from several backbench Conservative MPs who rebelled against the government.

But the government argued that giving domestic standards legal status was unnecessary as a commitment was already there in ensuring UK standards would be kept in any trade deals.

However, industry groups have warned the UK may be forced to accept lower standards to secure a future trade deal with the likes of the US.

The British public have also raised their concerns. An NFU petition demanding UK standards to be safeguarded has gained well over one million signatories.

Meanwhile, amendment 18, tabled by Lord Curry, which would have made the Trade and Agriculture Commission statutory, was not put to a vote by the Speaker as it would impose a charge on the public revenue.

The government used a procedure under the Parliament Act 1911 which dictates that the House of Lords cannot pass legislation concerning the authorisation of expenditure.

Campaigners said this amendment would have ensured British farmers were not unfairly undermined in any future Brexit trade deals.

Kath Dalmeny, chair of the Future British Standards Coalition, said it was 'dismaying' that the government opposed attempts to put into law its own commitment to maintain British food standards.

"It is perfectly possible to have high standards at home and sign trade deals with new trading partners who meet them. It’s what consumers have repeatedly said they want,” she added.

The RSPCA said the government had 'once again failed' to make good their manifesto promise that they would not sell out the UK's high standards for 'a quick trade deal'.

The charity's chief executive, Chris Sherwood said: "The government must act now to prove they are not preparing to ride roughshod over the opinion of the British people, the hard-won animal welfare standards in this country and the livelihoods of British farmers."

"It is bitterly disappointing that the majority of MPs have chosen to ignore the groundswell of public and professional feeling," said James Russell, BVA president.

The Agriculture Bill and its down-voted amendments will now return to the House of Lords in a parliamentary process known as 'ping pong'.

The bill may go back and forth between each House until both chambers reach agreement on the exact wording of the legislation.