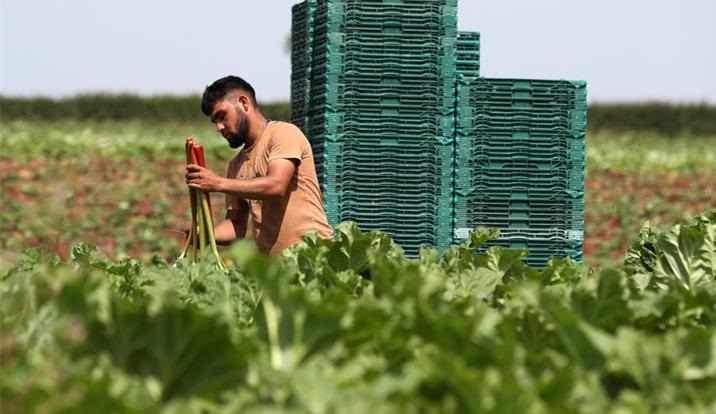 The NFU will send a letter to Immigration Minister Robert Jenrick amid concerns over the future of visas for seasonal workers (Photo: NFU)
Sign in to add your own press release SIGN IN Register

Growers are being urged to sign an NFU letter to the immigration minister highlighting concerns over visas for seasonal farm workers.

The letter calls for reassurances on the future of the seasonal workers scheme as the industry sees soaring energy costs and a lack of workers to pick crops.

The NFU says this is posing a 'serious threat' to the future of the UK’s fruit and vegetable industry.

The union's letter explains that securing sufficient seasonal labour remains an 'acute challenge' for the sector.

NFU data shows that shortages peaked at 40% in the spring and have averaged 15% across the year to date.

The letter, which is being sent to Immigration Minister Robert Jenrick, needs farmers and growers to sign it before 29 November.

NFU Deputy President Tom Bradshaw said there was a need for 'urgent clarity' on the number of visas amid concerns that government commitments would fall short of what was needed.

"The news that the Seasonal Workers Scheme is guaranteed to 2024 was a welcome boost for growers last year," he said.

"However, we remain concerned that the number of visas available are not sufficient to prevent further crop losses and a continued fall in UK production.

"We need urgent clarity on the scheme and a much more collaborative relationship between the Home Office and the NFU to find solutions."

The horticulture sector has been particularly impacted by workforce shortages, with UK fruit and vegetables, plants and flowers going unpicked.

The NFU's letter says this has led to a significant financial loss for British producers, as well as perfectly edible food being wasted.

While the government’s own food strategy includes an ambition for growth in horticulture, the letter warns that domestic production is currently falling at a worrying rate and is way below its potential.