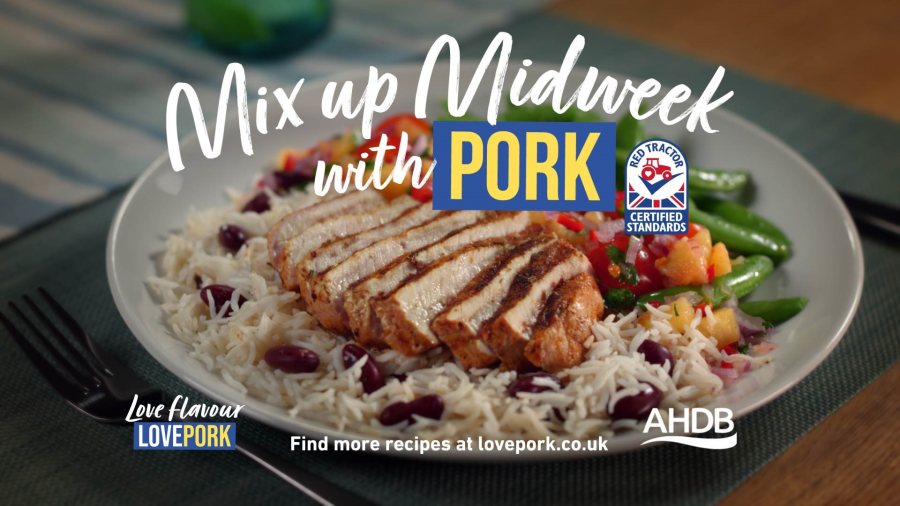 Pork is taking centre stage in a health-focused marketing campaign spearheaded by the AHDB to support long-term demand for pig meat.

The meat will be championed as a healthy and versatile choice as part of levy board's latest burst of its ‘Mix up Midweek with Pork’ marketing campaign.

Helping to ensure that pork continues to feature on shopping lists of Britain’s households into the future, the campaign aims to inform younger consumers about the leaner cuts of pork.

These include medallions, loins, mince, and fillet, with the campaign also looking at how pork can form part of a healthy, balanced diet.

It follows AHDB’s 'Feed the Family' pork campaign, which raised awareness of the meat's positive role in meal choices during the current cost-of-living crisis.

The new Mix up Midweek with Pork campaign will continue to promote affordable meal choices with a range of recipes that come in at under £1.50 per head.

AHDB says it is also reaching out to more people with the campaign, by extending the target audience to individuals aged 18–25 years old who are also known as Generation Z.

This is an age category which currently has less of an affinity with pork and a lower purchase intent than the core target audience.

Gen Z will be targeted by fellow influencers through recipe videos on social media channels and humorous sketches educating them about pork’s nutritional benefits.

Running from 23 January until 24 February, British households will see a 30-second advert on ITV, Channel 4 and Sky for two weeks.

“Two popular influencers on TikTok will also feature a fun, attention-grabbing video to encourage the Gen Z audience to think of pork as a healthy source of protein and a nutrient-packed alternative to chicken. This content will be promoted on Instagram.”

Ms McDermid explained that marketing was one of AHDB Pork’s top priorities for the next five years and beyond.

"We are committed to delivering award-winning consumer marketing campaigns that will drive positive attitudes to pork consumption in and out of the home.

The campaign complements AHDB’s We Eat Balanced marketing campaign that is currently running, showcasing the sustainable attributes and health benefits of red meat and dairy.