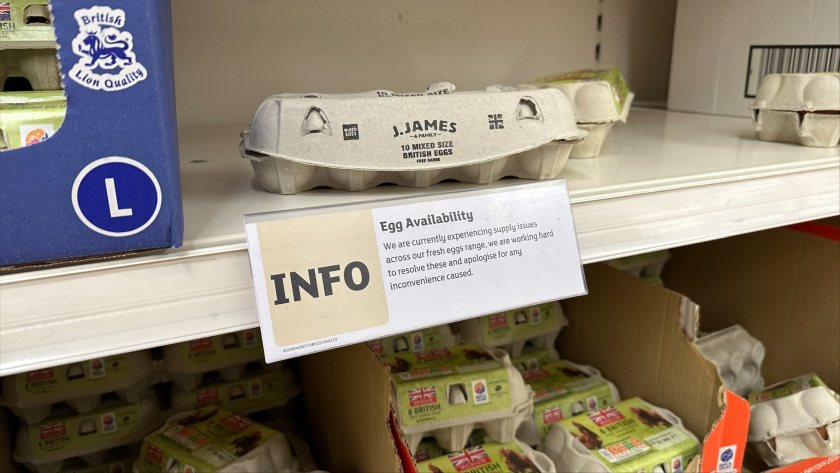 Some retailers suggested that the ongoing bird flu outbreak was responsible, but NFU Scotland said this was a 'red herring'
Sign in to add your own press release SIGN IN Register

A failure by supermarket chains to deliver a price boost to farmers struggling with costs has been blamed for the shortage on eggs on shelves.

This week, several retailers including Tesco, Lidl and Sainsburys issued warnings about rationing the number of packs of eggs shoppers could purchase.

Some retailers suggested that the ongoing avian influenza outbreak was responsible, but NFU Scotland said this was a 'red herring'.

The union pointed out that retailers had failed to recognise the surge in costs seen across the egg sector.

It said supermarkets hadn't delivered a fair price back to producers, in turn forcing egg businesses to reduce the numbers of birds in a bid to control losses.

He said the biggest driver behind falling egg production was "a crisis of confidence".

"Retailer claims that avian influenza is behind the shortages [is] completely disingenuous," Mr Thompson added.

"Retailers were informed in the spring that soaring costs in feed, packaging, and electricity needed an immediate increase in the prices paid to farmers if they were to continue to keep birds.

"Shop shelf prices for eggs increased but the proportion of the price increase paid back to producers did not cover costs."

Retailers were warned by NFU Scotland and other industry bodies, but those calls were 'largely ignored', and that warning 'is now coming home to roost'.

"If they deliver a fair price back to egg producers, egg producers will respond and ensure that fresh eggs will be freely available in stores," he said.

The British Free Range Egg Producers Association (BFREPA) said it was 'not surprised' by the development, following warnings the body made that the UK would be short of British eggs by Christmas if farmers were not paid a sustainable price.

Robert Gooch, BFREPA chief executive, said that seeing imported Italian eggs on UK shelves was a "wake-up call to all retailers that they can’t expect farmers to work for nothing".

He said: “We have been warning for months that failing to pay farmers a price which allows them to make a profit would result in mass de-stocking or, worse still, an exodus from the industry."

Data by BFREPA shows the average price of a dozen eggs has risen by about 50p in retailers, but some farmers have only seen a price rise of between five and 10p.

In March, the industry body called on all supermarket chains to increase the price paid to producers by 40p per dozen.