State of our countryside: New map reveals loss of farmland

Large-scale changes to the environment of the United Kingdom, including an apparent loss of habitats and agricultural land, have been revealed through an updated national map of land cover launched by researchers at the University of Leicester together with consultancy company Specto Natura on 1 July.

The land cover map, which examines data from 2006 and 2012, is based upon a standardised classification system of 44 land cover and land use classes which are structured in a three tier system that shows how much of the UK is made up of artificial surfaces, agricultural areas, forest and semi-natural areas, wetlands and water bodies.

The ‘Coordination of Information on the Environment’ (CORINE) Land Cover (CLC) map forms the central part of the European Land Monitoring Service under the Copernicus Programme. It is a European-wide project gathering together information relating to the Environment within the European Union.

Professor Heiko Balzter, Director of the Centre for Landscape and Climate Research at the University of Leicester and leader of the study, said: “Environmental information from satellites is hugely important to keep a check on the quality of life in the UK. The European land monitoring service turns satellite data into policy-relevant information. The CORINE map is the only consistent European information on land cover change that allows a comparison with our neighbours.” 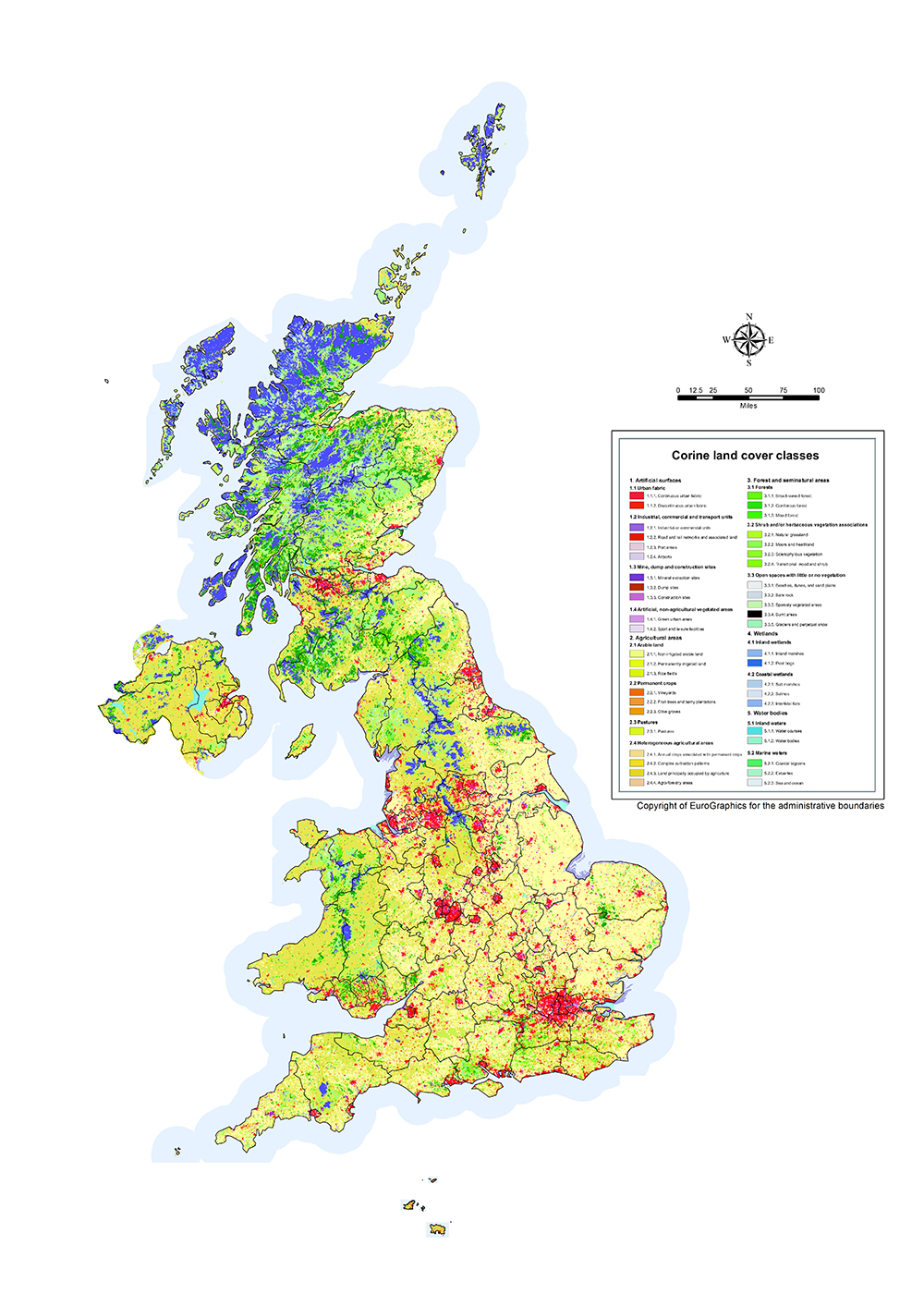 Professor Balzter added: “For the reference year of 2012, this is the only land cover information available for the UK. At the scale of change mapping of 5 hectares or larger, there appears to be a loss of semi-natural habitats and agricultural land. The apparent decline in wetlands is particularly concerning.

“The maps show the need for a more detailed study of the state of our countryside, because of the technical limitations of the CORINE mapping approach at a coarse spatial scale.” 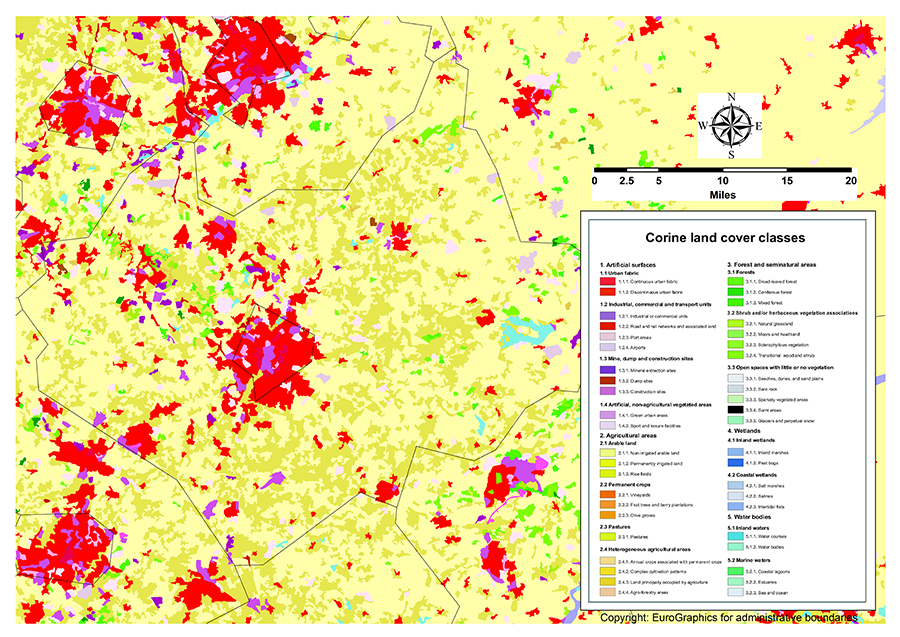 The changes are dominated by forest management, therefore their concentration is higher in Scotland and Wales, following the distribution of managed forest.

Forest loss: Nearly 3,000 hectares of coniferous forests were cleared for industrial development. Conversion of coniferous forest to industrial and mineral extraction sites largely relates to the erection of wind turbines in upland areas, mainly in Scotland. Wind farms fall into the industrial land cover class in the European system. The rate of conversion of land to sport and leisure facilities, mainly golf courses at this scale, continues to decline. Clear cutting of mixed forests accounted for another ca. 3,000 hectares.

The most dominant land cover type in the UK in 2012 remains agricultural land, followed by forest and semi-natural vegetation. Artificial surfaces represent 8% of the country with the majority being urban settlements.

In addition to the new land cover map, the previous 2006 land cover map has also been corrected by the team and updated to make sure the change results more closely reflect reality.

The 2006 revision and 2006-2012 change maps were produced by visual interpretation of optical and near-infrared satellite images provided by the European Space Agency with a spatial resolution of 20m, supplemented with higher spatial resolution images with 5m pixels. The 2012 map was produced in a GIS operation adding the revised database and the change database.

Dr Beth Cole, postdoctoral researcher from the University of Leicester’s Department of Geography in charge of the map production, said: “The production of the 2012 CLC map and the detection of land cover change between 2006 and 2012 shows a continuing trend in the UK landscape of the rotation of clear-cutting and regrowth associated with forest management and a growth in artificial surfaces associated with urban expansion.

“Monitoring like this at a National and European scale is key to allow us to identify these broad landscape scale changes. With a significant improvement on the previous version of the 2006 map, as well as the 2012 update, this study provides data for a large number of users and can be fed into a wide range of research topics and applications.”

The interpretation of satellite images took two years and was carried out with funding by the European Union, supported by the Department of Environment, Food and Rural Affairs (Defra) and the European Environment Agency (EEA).

Initiated in 1985, the 2012-based land cover map is the 4th generation of the CORINE map, providing consistent geographical information across Europe.

Dr Geoff Smith, director at Specto Natura Ltd., added: “We have been involved in the CORINE at UK and European levels since the 2000 iteration. Although not always relevant at the local scale, CORINE is an important initiative demonstrating continental-wide environmental monitoring and placing the UK in a broad European context.

“The European Sentinel satellites and harmonisation activities such as the EAGLE Group will drive and improve the future CORINE and high-resolution layer iterations producing a paradigm shift in the information that will be available freely and repeatedly to practitioners and policy makers responsible for environmental monitoring.”

The CORINE land cover maps have many real-world applications. As a freely available dataset they can be used in any agency or business.

The maps have informed environmental policy in the fields of climate change, nature conservation and biodiversity, natural resources, environmental health and quality of life.

These are produced by commercial service providers and have been checked by the University team as part of verification and enhancement processes.

The HRLs are currently being revised by the EEA and the service providers and will be officially launched in October 2015 during the “New horizons for European and Global land monitoring” event be organised by the European Environment Agency and the European Commission’s Joint Research Centre, supported by DG GROW.

The event will cover the whole range of products, from the local, pan-European and global components and also the in-situ component.

Chris Steenmans, Head of ICT and data management at the EAA added: “The EEA is very pleased to have the collaboration of countries in a European project that already reached its fourth edition and which provides very valuable information to support its regular assessments and reports.”

High-resolution images of the maps can be found here: