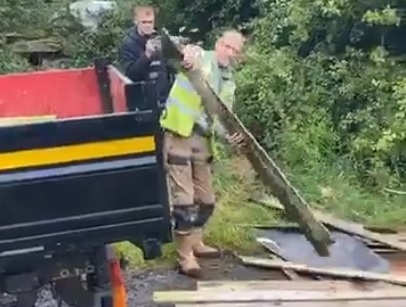 A viral video shows the moment a Scottish farmer forced fly tippers to pick up their rubbish after dumping it on his land.

James Johnston, who farms near Glasgow, filmed the two men picking up dumped wood from a field and re-loading it back into their van.

The video, which was posted on Facebook on Saturday 1 August, has now been seen more than 215,000 times.

Mr Johnston says on the clip: "Ladies and gentlemen of my Facebook Live, here's the two f****** cretins who have been dumping sh** in my fields.

"All this has been dumped in the gate of the field. It seems we now have to lock the gates every time we go through them."

The farmer sent the clip to ClearWaste, an app that allows people to report waste crime incidents such as fly tipping.

The company uploaded the clip with the caption: "Farmer James Johnston caught fly-tippers in the act - and made them load it all back onto their truck."

A recent investigation into the issue of flytipping found that large-scale incidents of the crime in England have more than doubled in the last six years.

Last month, a Lincolnshire farmer demanded tougher government action on flytippers after coming across 'three lorry loads' of waste dumped on his land.

Andrew Ward, who farms in Leadenham, said it was 'ridiculous' that farmers had to put up with waste crime.

He called on his local MP Dr Caroline Johnson and the wider government to issue tougher deterrents and action on flytippers.