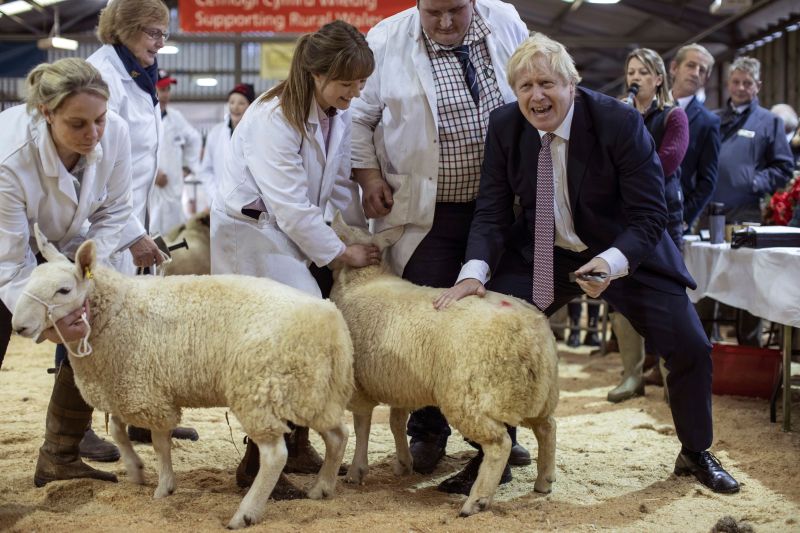 Boris Johnson met Welsh farmers and even trimmed a sheep as he courted the farming vote at the Royal Welsh Winter Fair.

The prime minister attended the annual event, now in its 30th year, in Llanelwedd on Monday (25 November).

There, he served locally-sourced beef and lamb sandwiches from a food stall, inspected prize cattle in the livestock ring and trimmed a sheep.

At the fair, Mr Johnson joked that the Labour leader Jeremy Corbyn would 'fleece the entire country'.

The taste of country life was part of a tour the prime minister made as he unveiled the Welsh Conservatives' manifesto for the upcoming general election.

In Wales for the Royal Welsh Winter Fair, meeting farmers who want to get Brexit done?? pic.twitter.com/1p3QeG805k


He said the Conservatives' Brexit deal would keep British farming 'absolutely protected', enabling the government to find more international markets for farmers to sell to.

Mr Johnson said in a statement: “Labour has a rotten record in Wales and has let down people across Wales badly, from healthcare services to a lack of investment in transport networks. The Conservative party will put that right.

“The Welsh dragon will roar louder than ever before.”

It follows the manifesto releases of both the Labour Party and Liberal Democrats last week.