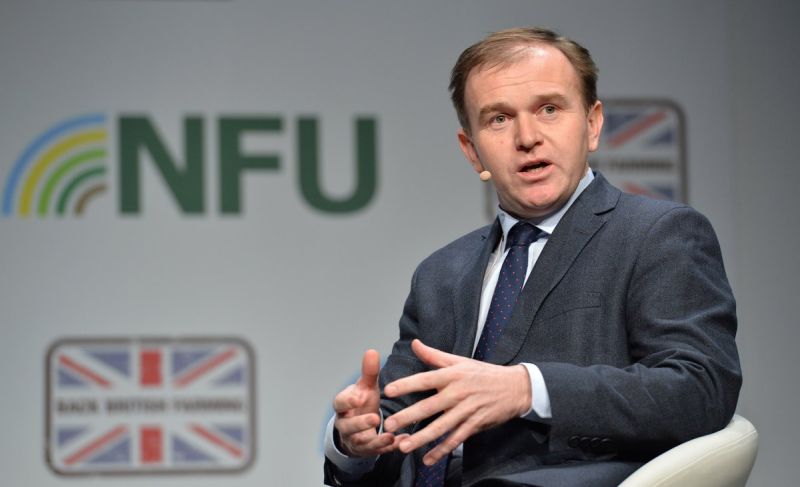 Defra Secretary George Eustice has insisted that the government will defend food and farming standards post-Brexit, as he faced a barrage of questions at the NFU annual conference.

The Secretary of State maintained that the government would not relax standards on food imports to secure trade deals with the US and other countries.

This comes as leading figures in the US have repeatedly said that the UK would have to abandon regulations if it wanted a transatlantic deal.

The previous day, NFU president Minette Batters had told conference delegates that it would be "insane" for the UK to allow imports of products that would be illegal to produce in this country.

George Eustice said at the NFU conference: "In the UK we have built a very special market based on provenance, with particular attention to food safety and animal welfare standards.

"We will not jeopardise that through trade deals in the future. I have always been very clear about that."

One angry delegate tackled the Secretary of State about what he said recently on the Andrew Marr show, where he had suggested there was scope for compromise on UK standards in a US deal.

"Let me just explain the point that I was making. In international trade law at the moment we have such things as tariffs and we also have SPS (sanitary and phytosanitary) restrictions, which aren't always directly related to food safety issues.

"Sometimes they are addressing a wider problem like animal welfare and poor husbandry. So the critical thing in our future SPS regime is it is not only about what treatments there might have been, it's also about management approaches to farm husbandry to reduce disease problems," he said.

"It's also about recognising differences in animal welfare standards," he added. "We in the UK have been in a different journey to the US over the last 20 or 30 years.

"We have had a farm to fork approach to reduce disease through good farm husbandry. We want to retain that and we want to ensure also that other countries that export their products to us also abide by that type of approach.

"So I think there is a way through this where you can ensure that producers from other countries wanting to export to our market meet our standards.

"There is a way of doing that in my view. But there obviously needs to be a discussion if you are going to do that.

However, Minette Batters said farmers had heard warm words on the issue but no commitment.

"Your predecessor (Theresa Villiers) talked just this week about the need to maintain those standards on imports," the NFU president said.

"When you were on the back benches for a short time you put down a series a technical amendments, you wrote an article in the Guardian talking about having trade negotiations whereby food had to be produced to those same standards.

"Here we are, still having to have the discussion across government having left the EU. It feels pretty terrifying to me."

Mrs Batters added: "We have asked for a commission on standards. Michael Gove (a previous Environment Secretary) said he would do it but we are no further on with that.

"We have asked for legislation in the Agriculture Bill to support this but we don't seem to be any further on with that. It still seems to be a discussion.

"We need reassurance on this area that government is going to be listening."

Mr Eustice said that the Conservative Party manifesto at the recent general election had committed to maintaining animal welfare and food safety standards.

He was working closely with colleagues and officials in the Department for International Trade and discussions would be had so that potential trade partners understood the UK's "farm to fork approach."

Still the NFU president pressed the Secretary of State: "There just seems to be on this issue a total lack of agreement in government as to what the future means on food standards."

She said: "My worry is you are talking a lot, about raising the bar for farmers here - sending farmers higher up the ladder on legislation, on welfare - when we have no assurance at all on the standard of food imports and that does one thing, that puts these guys out of business. "

George Eustice replied by saying that farmers had an assurance because it was in the Tory manifesto.

One delegate said that since July 2019 the UK had imported nearly 100,000 tonnes of oil seed rape from Ukraine where neonicotinoids were used in growing the crop.

Neonicotinoids have been banned for British growers. Minette Batters said the rules applied in the UK were not being applied to oil seed rape imports

British battery cages were sold to producers in the Ukraine and were still is use, she highlighted.

"The danger is that we just allow more and more imports with methods that are banned here, that are illegal here," she said.

The Secretary of State was probed again in a press conference with journalists after his conference speech.

One journalist asked whether he realistically thought that the UK would be able to maintain its standards and still secure a trade deal with the US.

"Isn't the reality that it will be a choice between a US trade deal and protecting our farm standards?" he asked.

Mr Eustice disagreed: "I think you can in a trade deal address issues around animal welfare and food standards. Indeed, the US, themselves, do this on some of their trade.

"So at the moment when it comes to discussion about getting market access for British beef to the US, the US have said that the assessment of animals when they arrive at an abattoir should be done on the same methodology that the US use. So, what is sauce for the goose is sauce for the gander.

"The US, themselves, will set down conditions on suppliers who want to access their market. It is not at all extraordinary for us to do the same."

He was asked whether protecting standards would be a red line in trade negotiations. The Secretary of State simply repeated again that it was in the Conservative party's election manifesto.