Farmer relies on boat after flood leaves him stranded 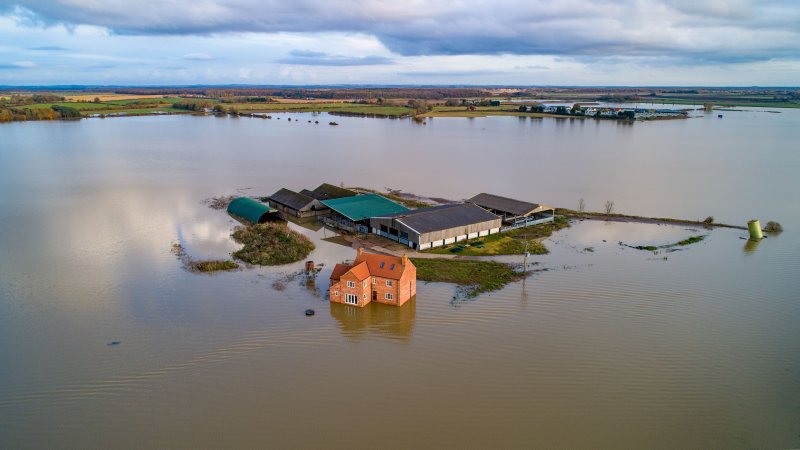 The farm in Barlings, Lincolnshire, has become an island after being surrounded by flood water (Photo: Geoff Robinson/Shutterstock)

A farmer has been left stranded and now gets around by boat following the devastating floods which caused a nearby river to burst its banks.

Farm businesses, particularly across the East Midlands and North East of England, have reported the worst rainfall in living memory.

In Lincolnshire, the floods have drowned more than 1,000 acres of farmland and many businesses are unable to work as they are left cut off and stranded.

For 28-year-old Henry Ward, the 10-foot deep flood has left him no choice but to get around the 250-acre farm by boat.

He had recently taken over the family farm in Short Ferry when the river Barlings Eau burst its bank following torrential downpour last Saturday (9 November).

Speaking to Lincolnshire Live, he highlighted his concerns over the affect the flood water will have on the land, crops and wildlife.

He told the paper: “We are going to have to carry the cost - at the moment we are not entitled to compensation, we are going to lose a year's cropping and revenue for a year.

“It means a loss of earnings for the year and then the clean-up operation on top of that.

“It is going to leave rubbish all over the land, all the ditches are going to be full of slit - to get the ditches done alone will be in excess of £10,000 - that is the tip of the iceberg.

“The impact on wildlife is just horrific and it's quite ironic that the Environment Agency is trying to protect species like badgers.”

Today I visited a farm in Stainfield, Lincolnshire to see how one local farmer is dealing with having 1,000 acres under water. We need the @EnvAgency to take action to repair breaches in flood defences and protect people and our farms. pic.twitter.com/sglxArbPLu

“We are going to put pressure on @EnvAgency” @EdwardLeighMP thank you for coming to see us! https://t.co/OsIsPqY9kL


Farmers affected by the floods are now able to apply for government grants of up to £25,000 as part of the Farming Recovery Fund.

The Royal Agricultural Benevolent Institution (RABI) has also announced that it will fast-track grants to those farmers who need it.