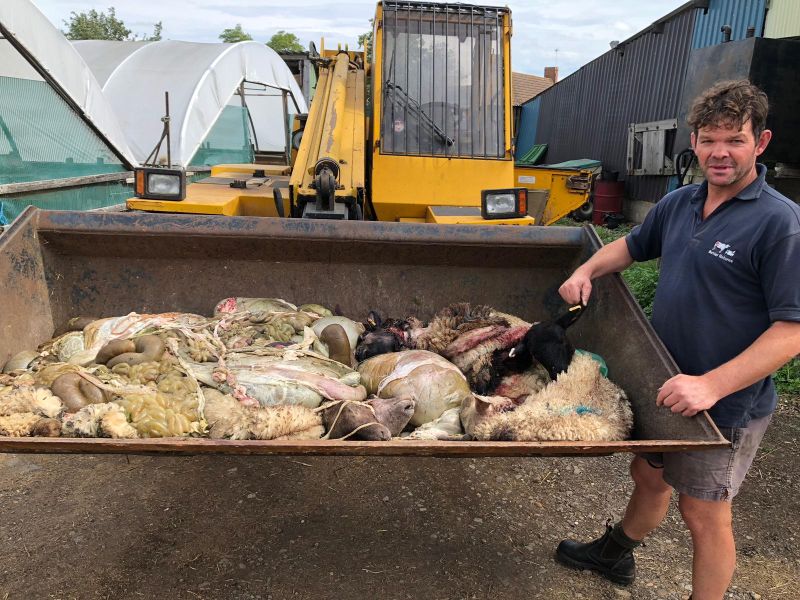 Patrick Green pictured with the remains of some of the slaughtered sheep (Photo: Northamptonshire Police)

A Northamptonshire farmer has spoken of his devastation after criminals illegally butchered 26 lambs in the latest such incident plaguing the county.

The incident happened on Friday August 30 in a field off Roman Road and Sandy Lane, between Duston and Harpole.

Farmer Patrick Green, who has spent his life breeding and raising sheep with his father, came across the remains in the early hours of that morning.

He discovered the remains of at least 26 of his lambs and New Zealand Suffolk x Mule breeding ewes.

They were illegally slaughtered overnight, making it the latest such incident hitting the county.

The incident is being treated as part of Operation Stock, the Northamptonshire Police investigation into illegal sheep butchery.

Mr Green, a third generation farmer, said: “These sheep cost me a lot of money to buy, I’ve invested in them for the future of my farm and it makes me very sad to see them killed like this. I feel very empty.”

He has been breeding to improve his flock for the past five years, shaping his farming operation to solely concentrate on rearing sheep.

He said: “We rely entirely on our income from the sheep and what I’ve been breeding for the past five years means I’ve made progress for the ideal, healthy animal, one that’s welfare-friendly and easy to produce and rear.

“There’s lots of work gone into them to produce a sheep that’s as close to the ideal as possible.”

Speaking of the moment officers broke the news of the illegal slaughter, Mr Green said his initial reaction was annoyance and concern about the cost, before the emotional impact hit home.

“I spend my life looking after my animals, to produce them for the food market healthily and safely, breeding for the future of my stock,” he said.

“I’ve never killed an animal, I spend my time looking after them so they have good lives, and then someone comes along and brutalises them like this, and I feel it very keenly.

“I look after 1,300 lambs on my own and care deeply for their welfare. Something like this really makes you lose your drive and lose heart.

“Farming is isolated enough as a profession. I’m not a wealthy businessman, this is a day-to-day business and I work hard for every penny I earn,” he said.

The farmer has decided to speak out about his experience to raise awareness of the impact of illegal slaughter offences on farmers, and is encouraging anyone with information about the offences to contact police.

Northamptonshire has experienced numerous slaughter incidents within the last few months. On 19 August, criminals killed 11 lambs on a Whilton farm.

In July alone, police received at least five reports of animals being killed and butchered in fields overnight, including incidents in Crick, Kelmarsh and Rushton.

A 39-year-old man and a 40-year-old man have been arrested in connection to illegal butchery and sheep theft.

Anyone who sees anything suspicious in a rural area or around livestock is asked to call Northamptonshire Police on 101 quoting Operation Stock, or to call 999 if they think a crime is in progress.