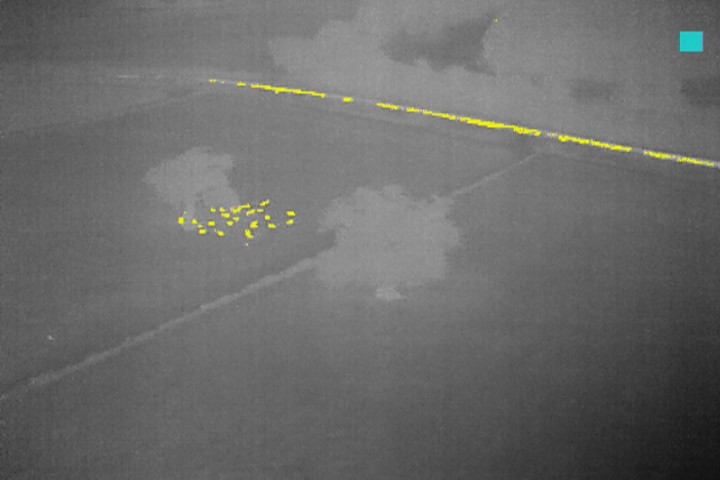 A shot taken of sheep in fields close to the A428 in East Haddon - heat sources like animals, people and roads show up on the camera in yellow (Photo: Northamptonshire Police)

Police are using drones to keep an eye on livestock during the night following incidents of illegal sheep butchery in Northamptonshire.

The police's investigation into illegal sheep butchery continues following news that well over 100 sheep have been slaughtered on-farm since March in the county alone.

Operation Stock is Northamptonshire Police's response to such incidents.

Using the drone’s thermal image technology and flying no higher than 400ft, its operators can monitor large rural areas.

The technology can detect any heat sources such as livestock, people or vehicles, shown up in bright yellow.

If any suspicious activity is spotted, the operators can liaise with officers on the ground to check it out.

The drone patrols are being carried out alongside ongoing ground patrols and community engagement by officers, who are also linked in with neighbouring forces who have seen similar incidents.

It follows news of a 40-year-old man who was arrested in July in connection with a string of illegal butchery incidents in Northamptonshire.

Farmer Phil Neal, who farms near Crick, told how the incident was 'the worst thing that my children have witnessed' when he discovered the remains of 14 lambs on his land.

As the investigation into the illegal slaughter incidents continues, the force is reminding anyone who sees anything suspicious to call 101 quoting Operation Stock, or 999 in an emergency.