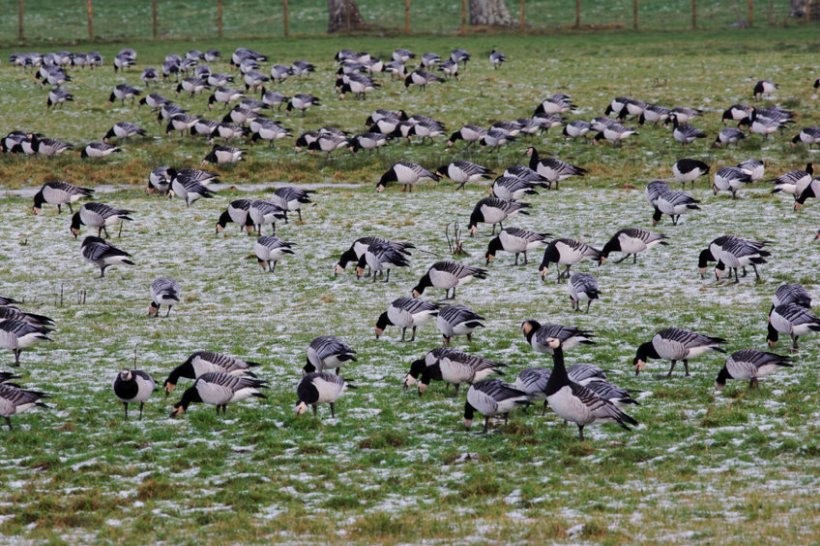 Highly-pathogenic avian influenza has caused the loss of a third of the Solway barnacle geese population, RSPB says

Concerns are growing over the spread of avian influenza following reports of the disease continuing to circulate in seabirds, causing the death of thousands of birds in Scotland alone.

RSPB Scotland has warned that the 2021-22 outbreak of highly-pathogenic avian influenza (HPAI) is still affecting wild bird populations in the UK.

The outbreak has been described as the UK's worst ever, and has affected a large number of commercial and backyard poultry sites.

In England alone, there has been 98 cases of bird flu in poultry and captive birds since the start of October 2021, while Scotland and Wales have recorded eight and five cases respectively.

But the RSPB Scotland said the outbreak has also had an 'unprecedented impact' on wild birds, causing the loss of a third of the Solway barnacle geese population.

"We have been in unchartered territory with the disease this year and its effects on wild birds," the charity said, "This is continuing with the focus now being on seabirds in Scotland."

Late last summer, sick and dead great skuas were found in Shetland, Orkney, St Kilda and the Flannan Isles and they tested positive for HPAI.

This happened just prior to migration – the species winters off North and West Africa – so the scale of impact on the population was unclear.

RSPB Scotland said: "Now the skuas are back and RSPB Scotland is collating data from colonies to assess impacts, but we were not expected to find great skuas again sick and dying from HPAI.

The charity added: "We are also seeing eider ducks and other seabirds including gannets succumbing to HPAI."

Britain's seabird populations are of global significance, with the UK holding 56% of the worlds northern gannet population.

Scotland holds nearly half (46%) of the world’s northern gannets and 60% of the world’s great skuas. Both these species are amber listed in Birds of Conservation Concern 5.

"There is great concern for the potential impacts of HPAI on our already beleaguered wild birds," RSPB Scotland warned.

It comes after the disease was confirmed on a Shropshire poultry farm last week, making it England's 98th case of the virus since the start of the 2021-22 bird flu season.

All birds on the infected premises were humanely culled, and a 3km Protection Zone and 10km Surveillance Zone have been put in place around the site.

The case was of renewed concern to the poultry sector, as it came just one month after the government eased the UK's mandatory poultry housing order.

The strict measure was introduced on 29 November 2021 to help stem the UK's outbreak of HPAI.